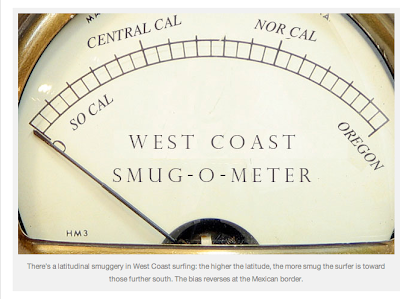 There’s a latitudinal smuggery in West Coast surfing: the higher the latitude, the more smug the surfer is toward those further south. Not everyone is prone to it, but it’s ingrained in the culture. Central Californians grumble about SoCal. North Coasters scoff at Central Coasters. And Oregonians seem to loathe all Californians (they’ll wave as you drive by with California plates, but will usually extend only one finger).

The latitudinal bias reverses at the Mexican border. At that point, decreasing latitude equals more respect. There’s also a longitudinal offshoot, wherein those at the bottom of the latitudinal pecking order save their wrath for Floridians, but that is a separate phenomenon.

Some of the latitudinal smuggery stems from the rugged conditions found further north: bigger swell, colder water, harder weather. You have to be more hardcore to paddle out. That level of commitment demands respect. But the north-south animosity runs deeper than just surfing, it’s imprinted on the California psyche (See: Heated rivalry, Giants/Dodgers; or Fresh water, lopsided distribution of).

I’ve lived and surfed from San Diego to Humboldt and many places in between. Born and raised in SoCal, but having spent most of my adult life up north, I’ve also witnessed many a rant. After years of involuntary research, I’ve concluded that the vitriol directed toward SoCal is inversely proportional to the time actually spent at the hated latitude. The more frothing the rant, the more likely the ranter hasn’t ventured far from his home coordinates.

Usually the rant will contain dark references, spoken in hushed but acrid tones, about some sprawling southern dystopia collectively referred to as “L.A.” (pretty much encompassing anywhere south of Pismo Beach). The ranter will have, over beers in a seedy bar, heard rumors about this seaside hell, wherein hordes of neon kooks grovel on tiny waves while small, malformed children splash in waterfalls of raw sewage discharging onto the sand from outfalls connected to un-stenciled storm drains.

The whole thing is pretty funny. Everyone should just lighten up. Sure, some places are better than others, but what constitutes “better” is highly subjective. Bottom line: there are epic waves and cool people up and down the state. Save the tirades for something else, like that mysterious purgatory east of the L.A. County line I’ve heard rumors about in seedy SoCal bars, a place I’ve never visited and know little about, but nonetheless refer to it darkly as “Florida” …

by Tom Mahoney
Posted by Chris Burkard at 11:16 AM