4 flights, 2 layovers and 20 hours of Traveling with 2 flooded cameras and a lost cell phone.... Killer. 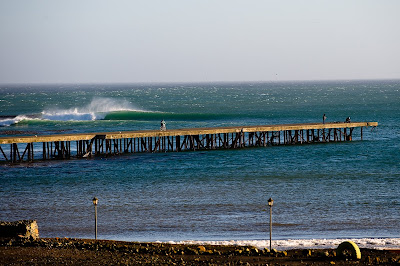 Halfway home and I cannot wait to touch solid ground. I am in Costa Rica airport after a slew of airport transfers and I decided to write a quick note about my amazing 10 days in South America, and why I am coming home early.
Although this trip ended in the tragedy of my 2 cameras + lenses (less than 2 weeks old!) I am still alive which is epic, and Ieven managed to save all the photos from the trip. My insurance however is probably not going to share the same feelings when i hit them with $10 grand worth of replacement costs.
In the town of L**** in Southern ******* I had what I thought was going to be a killer day shooting an offshore reef which until this point has been relatively unpublicized. After spending time motivating the surfers and myself, me and some locals went to the harbor to find a fisherman to take us out. As were heading out of the bay things were looking up, but halfway through the session I realized this boat driver had been drinking, and even the locals were having a hard time telling him where to position the boat so that we wouldnt be to close to the surfers.
A few wedging sets came through kind wide and peter mendia took a wave. He kicked out and all I can remember is that I was looking through the viewfinder and I fealt the camera smack me in the face, the boat driver was jetting the motor because he was position to close to the wave and our boat was headed directly toward it. If we would have spun around we would have risked  flipping,  so the only option was to gun it straight into the 8ft whitewash. With literally seconds I put both cameras into my stomach and bent over to brace for the impact, I was in the very nose of the boat, literally on the edge. I locked my legs and just felt the seaworld splash come over me. It was like a mini tidal wave of horror as I knew my cameras were soaked. I didnt even have time to think about what was going on. In retrospect it seemed that I we could have made it around but i doubt it.
As we bolted back to the harbor the video guy in the boat was totally devastated, (fully crying, poor guy) his HD cam was soaked, Non operational. I was kind of in a state of laughter with a little bit of shock, but this is actually where it gets scary.
The tide is sucking out and were heading into this harbor which is no wider that 30 yards across.  A cement jetty lines one side and a sanspit on the other. Waves fully are breaking into the jetty as well which already makes for a wet experience. As we head into the harbor our motor cuts and because of water intake, at this point the boat turns sideways with the current and since we have no motor that boat starts taking on water and not flushing (This means were sinking).  Probably the scariest experience is what happend next. We are heading back out to see but were smashing against the jetty, the captain ( or rather, drunk boat driver) is trying to start the motor but to no avail, We are literally heading sideways into the bow of another boat (commercial fishing vessel) that is not joke, 10X as big as ours (ours is pretty much a dingy big enought for 5 people) .. and were sideways.. Luckily this boat is parked against the jetty but I am picturing us tipping or getting smashed to pieces , and having to jump off. We smacked into the thing soooo hard, it cracked our boat. And we were well below their bow. I almost fell off the side but as the we struck the boat the raging  current was to our advantage and pulled us at an angle around the bow after smacking it instead of under it!
So we tried to tie a line to the boat but we are getting sucked out to fast. Deck hands are running around their boat and we were just sitting there like crabs in boiling water. We are past the boat now and are being pulled back out into the lineup of the wave and out to sea, Were dragging past the jetty and everyone is yelling different things, I dont know what is going on, and being the only english speaker it made things even worse. I could tell that our plan was to try and tie off to the jetty because their was some tie lines but we were just to far. The jetty was lined with tires connected by chains that acted as bumper guards, I bolted up and grabbed both my cameras bags which were filled with almost a half gallon of water.. (no joke) and jumped off the back of the boat onto the tires, as I ran down the jetty trying to grab the rope the boat drifted farther and farther away, I watched them drift out to sea in 30k offshore winds..  At that point the only thing I could do is thank god I was still alive and not in the boat. I ran down the jetty and tried to get peoples attention, but luckily within 10 minutes they pulled the motor cover off and got the engine back one, the boat was literally half submerged.
Anyway. Lets just keep things in perspective.. Your life is worth more than your camera gear, and having a story to tell your kids is priceless.
Posted by Chris Burkard at 2:15 PM